The Facts about Quebec Electricity Imports

Electricity trade between provinces works well when it is used to promote efficiency and is mutually beneficial for both jurisdictions. Over the past several years, Hydro Quebec has been aggressively pursuing options to lock in premium pricing for their electricity to increase their revenues off the back of customers in Ontario.

In June 2017, Quebec presented Ontario with an offer to sell 8 TWh, or approximately one-third of the output of the Darlington Nuclear Generating Station, of electricity annually to Ontario for 20 years. Ontario rejected Quebec’s offer on the basis that it would increase costs for Ontario ratepayers by approximately $30 per year while providing no additional benefit.

It is easy to understand Quebec’s desire to find revenue generating markets for its electricity monopoly, and why Ontario would appear an attractive target. However, the reality is the best deal Quebec could offer, representing just a fraction of the energy generated by Ontario’s nuclear stations, would have driven up bills for Ontario consumers. Hydro Quebec’s proposal was effectively to sell Ontario what it is already getting, on a long-term basis, at a much higher price than they are currently paid. The offer also ignored the value that low-cost nuclear power provides the province: safe, reliable and clean baseload power supporting 50,000 jobs across Ontario.

We have hydroelectric producers here in Ontario that are providing clean renewable energy at four cents a kilowatt hour, who claim they can provide a lot more than they are currently providing. They’re wondering why we’re going outside to Quebec when we can be doing so much more here in Ontario with the infrastructure that we already have.”
–          Todd Smith, MPP Prince Edward-Hastings (October 4, 2017)

Electricity imports from Quebec will never be a substitute for Ontario’s  baseload supply as they do not currently have available generation capacity all year-round and already rely on the province’s gas-fired generation capacity to bridge the gap in the winter. While Quebec’s energy surplus is available for the remaining part of the year, even this is a forecast to evaporate by 2028.

Similarly, Ontario would not have reliable low-carbon supply to send to Quebec after the Pickering nuclear generating station retires in 2024, removing a resource that Quebec uses to store water and support its surplus. 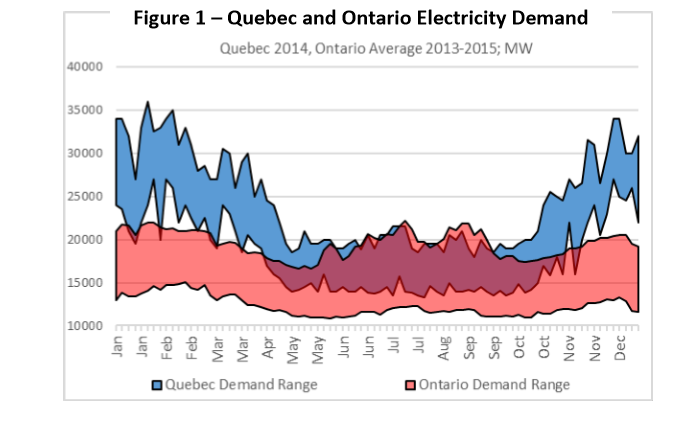 “Hydro-Quebec (HQ) notes that they currently have a need for additional winter peaking capacity in the range of 500 – 1,500 MW in the 2017 – 2023 time-frame,” the IESO states. “Therefore, to be able to supply Ontario with firm year-round capacity, it is expected that HQ would need to build additional resources above what they have for internal capacity needs.”

In 2017, The Independent Electricity System Operator (IESO) released a technical review of the electrical interconnections between Ontario and Quebec indicating that the maximum potential of reliable import capability from Quebec into Ontario is 2,050 MW, or approximately 15% of Ontario’s installed nuclear generating capacity. Importing this amount of power would require 5-7 years worth of upgrades to Ontario’s transmission system costing at least $220 million. Quantities beyond this amount would require the construction of new interties at a cost of approximately $1.4 billion, additional transmission infrastructure in both provinces, and take up to 10 years to plan, permit, build and commission.

Ontario’s nuclear plants produce electricity safely and reliably, every day, around the clock for Ontarians. Supplying approximately 60% of Ontario’s electricity at 30% less than the average cost to generate residential power, nuclear energy provides a moderating effect on household electricity bills. Refurbishing Bruce Power and Darlington will extend their lives for decades, providing a cost-effective, long-term supply of clean electricity for Ontario. This investment in energy security for Ontario is also creating thousands of jobs within the province and generating lifesaving medical isotopes in the process.

• The reality is that current market prices are approximately one-third of the contract price that Hydro Quebec was proposing.

• The contract proposed by Hydro Quebec was “take or pay” with no obligation on Hydro Quebec to supply power when Ontario needed it. It would have been less reliable from an operability perspective as well as being much more expensive than the current market arrangements. The contract as proposed would have resulted in increased hydraulic spilling in Ontario to accommodate Quebec’s more expensive imports.

• Notwithstanding the fact that firming the import of electricity from Quebec would increase bills for Ontario consumers, the 24x7x365 ability of Quebec to deliver large quantities (i.e. a nuclear station) of power is fundamentally limited by seasonal availability and transmission/intertie capacity – addressing the transmission issues alone could take a decade and would increase bills further for Ontario consumers.

• The Bruce and Darlington refurbishments represent Canada’s two largest infrastructure projects, this makes them targets for opponents, but also compelling reasons for decision makers to understand what these projects represent to Canada: clean energy, clean-tech innovation, lifesaving isotopes and thousands of jobs.

• In 2017, Ontario’s nuclear fleet generated more than 60% of Ontario’s electricity at an average cost of 6.9₵/kWh; 30% less than the average cost to produce residential power.
• 90 billion kWh+ of clean power generated annually for Ontario; equivalent to the annual energy use of more than 10 million homes – almost one-fifth (17%) of Canada’s electricity.